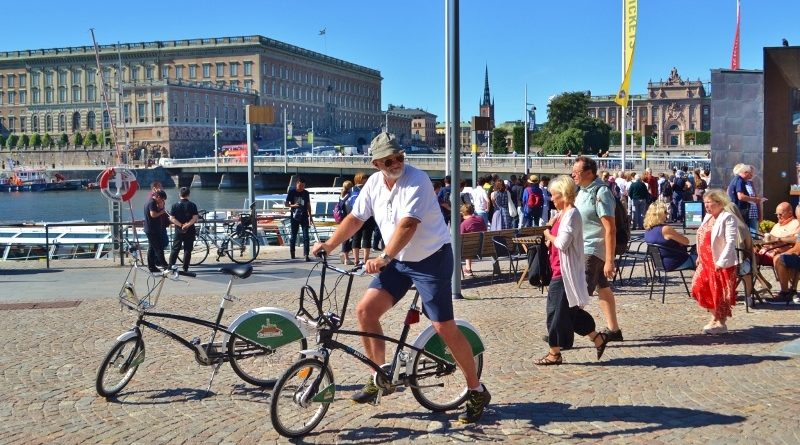 Stockholm  is the capital of Sweden and the most populous city in the Nordic countries; 952,058 people live in the municipality,  approximately 1.5 million in the urban area, and 2.3 million in the metropolitan area. The city stretches across fourteen islands where Lake Mälaren flows into the Baltic Sea. Just outside the city and along the coast is the island chain of the Stockholm archipelago.

Millesgården is an art museum and sculpture garden, located on the island of Lidingö in Stockholm, Sweden. It is located on the grounds of the home of sculptor Carl Milles and his wife, artist Olga Milles, who are both buried there. ABBA The Museum | An interactive exhibition in Stockholm Skansen (in English: the Sconce) is a combined open-air museum and zoo, located on the island of Djurgården. It was founded in 1891 by Artur Hazelius (1833–1901) to show the way of life in the different parts of Sweden before the industrial era. The Vasa Museum (Swedish: Vasamuseet) is a maritime museum on Djurgården which displays the only almost fully intact 17th century ship that has ever been salvaged, the 64-gun warship Vasa that sank on her maiden voyage in 1628. The Vasa Museum opened in 1990 and, according to the official web site, is the most visited museum in Scandinavia. From the beginning of 1961 to 1988, Vasa was housed in a temporary structure called Wasavarvet („The Vasa Shipyard“) where she was treated with polyethylene glycol. Visitors could only view the ship from two levels and the maximum distance was only 5 m (17 ft). In 1981, the Swedish government decided that a permanent Vasa museum was to be constructed and a competition for the design of the museum building was organized. A total of 384 architects sent in models of their ideas and the final winners were Marianne Jakobbäck and Göran Månsson with Ask („box“). The construction of the new building began on and around the dry dock of the old naval yard with an inauguration ceremony hosted by Prince Bertil on 2 November 1987. Vasa was towed into the flooded dry dock under the new building in December 1987, and during the summer of 1989, when visitors were allowed onto the construction site, 228,000 people visited the half-finished museum. The museum was officially opened on 15 June 1990. The Stockholm metro system has been called ‚the world’s longest art gallery‘, with more than 90 of the network’s 100 stations decorated with sculptures, rock formations, mosaics, paintings, installations, engravings and reliefs by over 150 different artists. Art in the subway – Visitstockholm Skogskyrkogården (official name in English: The Woodland Cemetery [1]) is a cemetery located in the Enskededalen district south of central Stockholm, Sweden. Its design, by Gunnar Asplund and Sigurd Lewerentz, reflects the development of architecture from Nordic Classicism to mature functionalism. Gamla Stan, the Old Town, is one of the largest and best preserved medieval city centers in Europe, and one of the foremost attractions in Stockholm… Mårten Trotzigs gränd (Swedish: „Alley of Mårten Trotzig“) is an alley in Gamla stan, the old town of Stockholm, Sweden. Leading from Västerlånggatan and Järntorget up to Prästgatanand Tyska Stallplan, the width of its 36 steps tapers down to a mere 90 centimetres (35 in), making the alley the narrowest street in Stockholm. Stortorget (Swedish: [ˈstuːrtɔrjɛt]. The Big Square) is a small public square in Gamla Stan, the old town in central Stockholm, Sweden. It is the oldest square in Stockholm, the historical centre on which the medieval urban conglomeration gradually came into being.[1] Today, the square is frequented by tens of thousands of tourists annually, and is occasionally the scene for demonstrations and performances.